The aim of the project is to create a counter-draft to colonial practices through anti-hierarchical, equal, intercultural cooperation between female artists from Delhi & Cologne.

The joint idea-finding and creation of the improvised dance performance and the joint authorship form the foundation of the exchange project. The conceptual approaches described here can be therefore be completely discarded.

A process of iteration describes the repetitive and mirror-inverted process of approaching a character of an exchange project.  The conceptual and pedagogical concept in both Delhi and Cologne unites the work of female artists from Germany and India:

4.)          Phase in Cologne: Arrival in Cologne with Swati Mohan and the three Indian dancers

5.)          Phase in Cologne: joint realization of workshop days in a Cologne in cooperation with the “Frauenberatungszentrum Koeln e.V.” and with three German dancers, implementation of the concept developed in Delhi

6.)          Phase in Cologne: joint performance in the Michael Horbach Foundation with the three Indian and three German dancers and other women from the workshops in Cologne

The individual dance expression of the performers is worked out using the “performative research” method.

The performance concepts follow a cognitive examination in the group with feminist texts by, among others, the philosopher Gayatri Chakravorty Spivak, lyrical texts and a discourse on, among other things, individual feminist lifestyle and restrictions on action for women.

Subject matter of the performance are feelings as basic, direct expression of inner power: joy, anger and sadness. 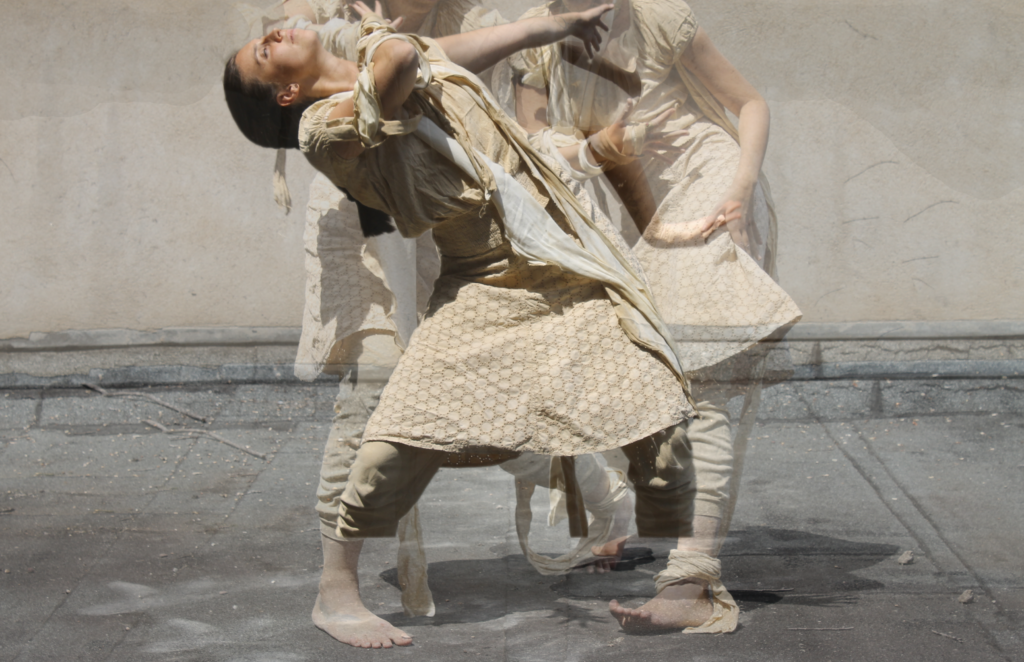 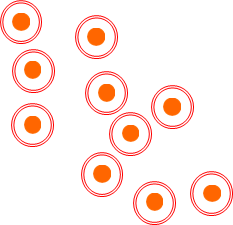 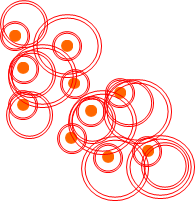 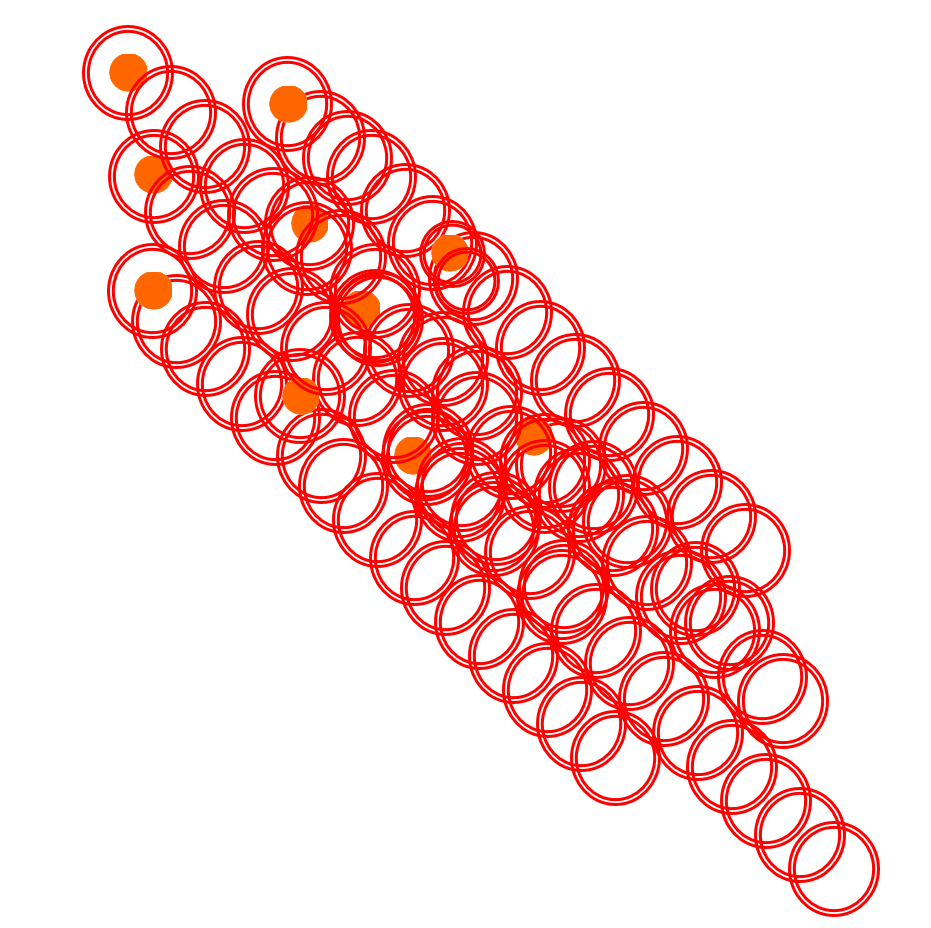 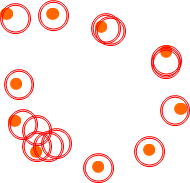 Phase 1: “Awakening of the absolute moment of joy”

In the first phase, the performers visualize moments of joy that trigger positive emotions. This phase takes as much time as each performer reaches a conclusive thought. In the preparation phase, exercises called “inner circles” have been done in order to reach the inner structure of the body and facilitate body movements. The round movement form helixes throughout the whole body.

The exercise of the “inner circles” is based on Anna Halprin’s “circle the earth”. An inner impulse is followed by minimal circular movements that start in one part of the body and gradually spread throughout the whole body. These turn into spiral movements. In artistic exploration, inner impulses and circular movements are used to create a transition into a movement of “wide circles”.

In the form of wide circles, with arms reaching horizontally into the air, the performers move in a common direction. The dynamics of the circular motion increase.

From the dynamic movement in one direction, the performers pass over into a common large circle. The initial speed of the movement ebbs away in calmly and consciously executed final circular movements. 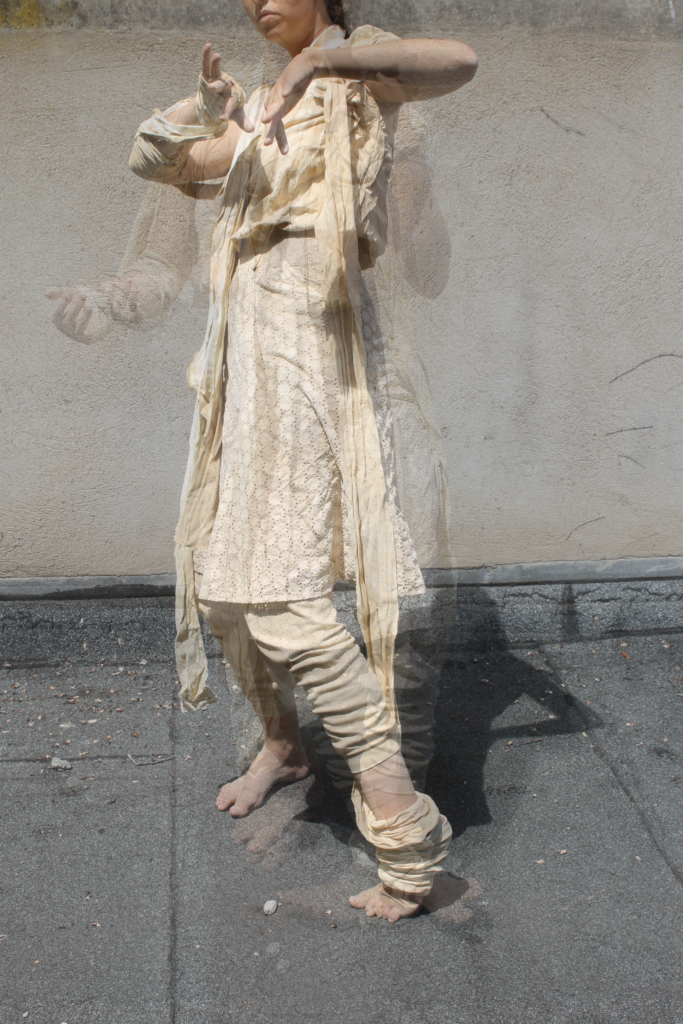 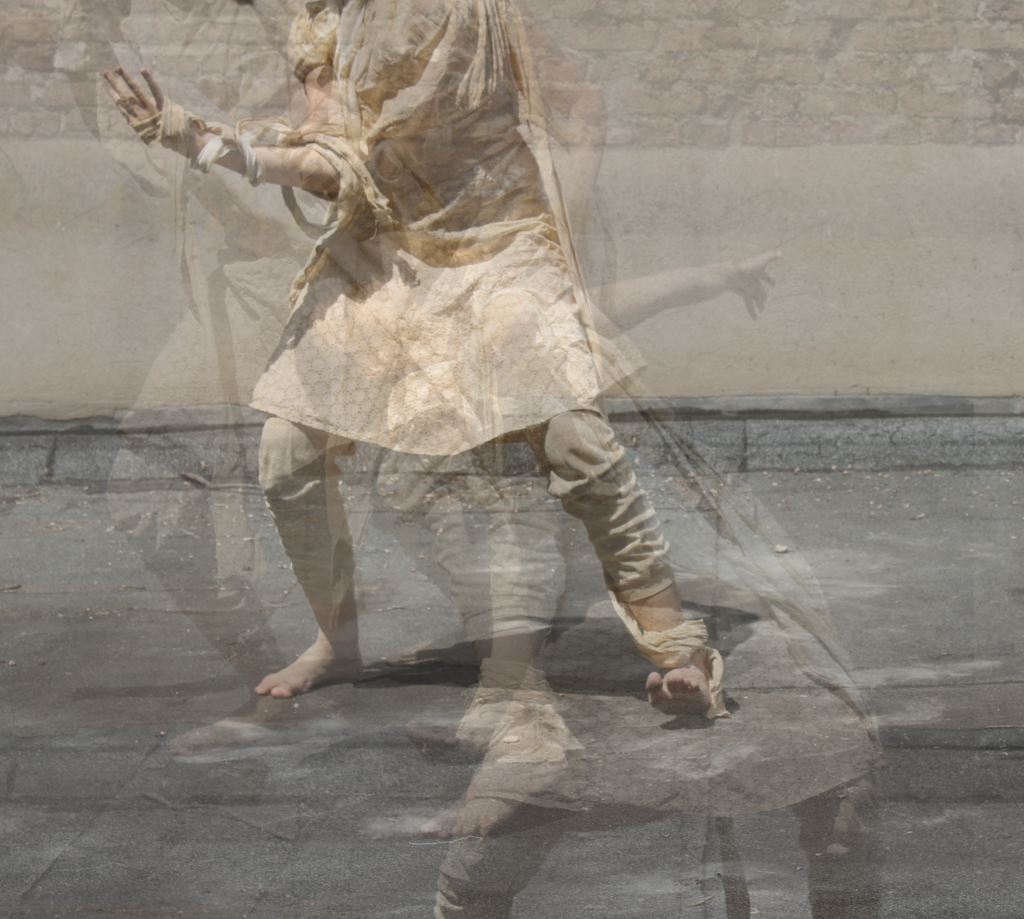 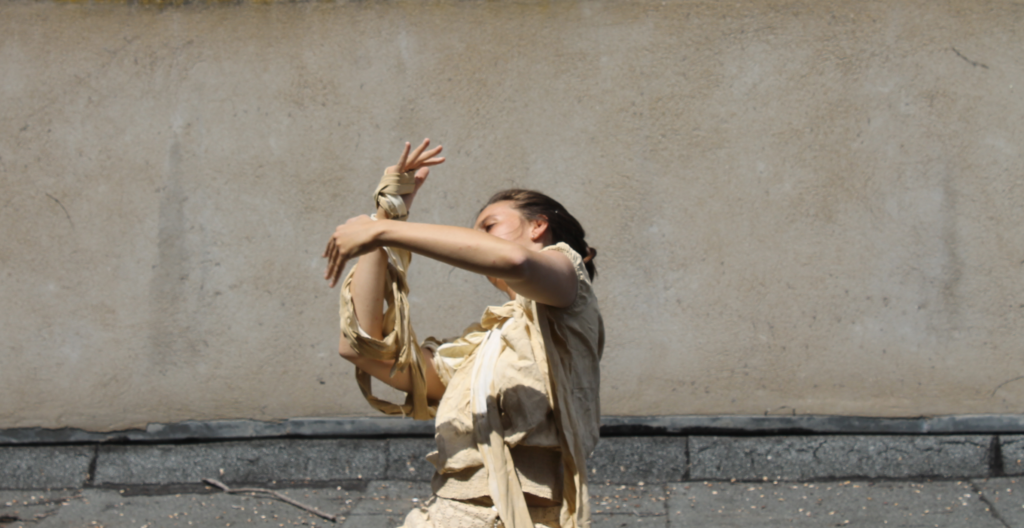 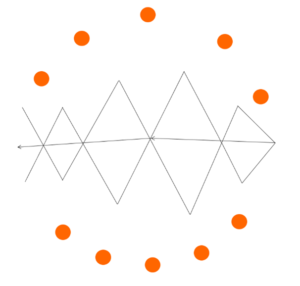 Anger can be a preliminary stage of empowerment. A feeling of anger will be underlined through a natural cause by a constantly repeating sequence of movements in which the performers touch each other by passing each other. In a crossing moment a state of rage can arise and/or be lured out of the performers. Each woman chooses the speed of her movement individually. The urge to move faster and faster can arise from the process of repetition. The feeling of anger is not be predetermined but generated successively in the performers. 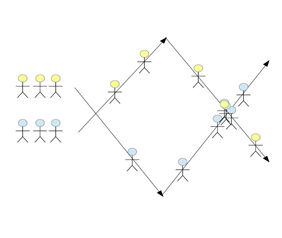 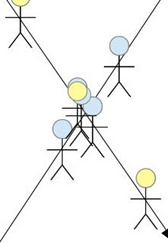 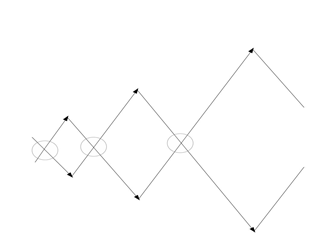 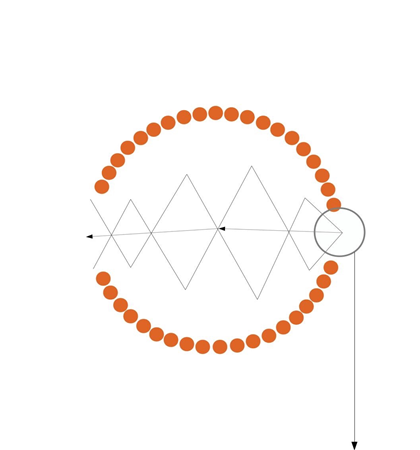 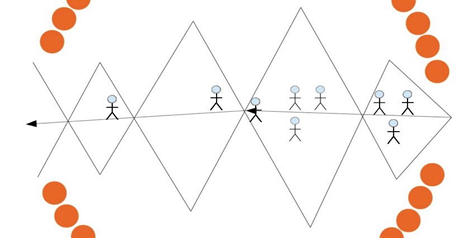 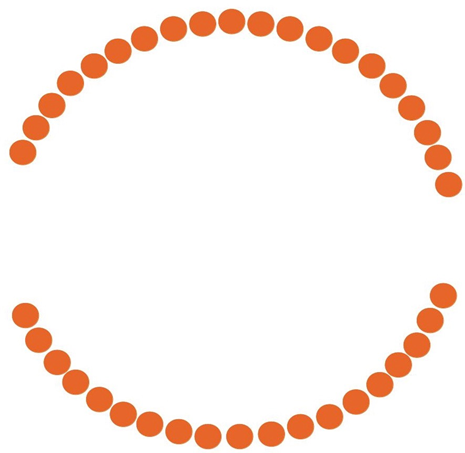 1.) Beginning: The performers are divided into two groups. Along a given line the performers move in the same direction at an individually chosen tempo.

3.) Turning point: Both groups come together at the other end of the space to complete the increasing flow of movement and move back to the starting point.

Sadness as a silent force that reveals inner depth.

In this phase the performers can use the idea of sinking in their bodies and their movement. The sinking down towards the earth goes hand in hand with an introspection, they are „sinking in the self“ This workshop and performance deal with the visualisazion of the element of water – melting, sinking, dissolving.
The qualities in the body are transferred to movement patterns in space. With the continuity of rinsing water, the performers move through space (see grafic), always in connection with each other, connected through an invisible threat.
Principles in this phase are: slowness, continuity, introspection and connection. 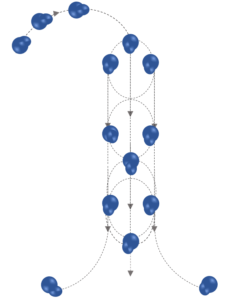 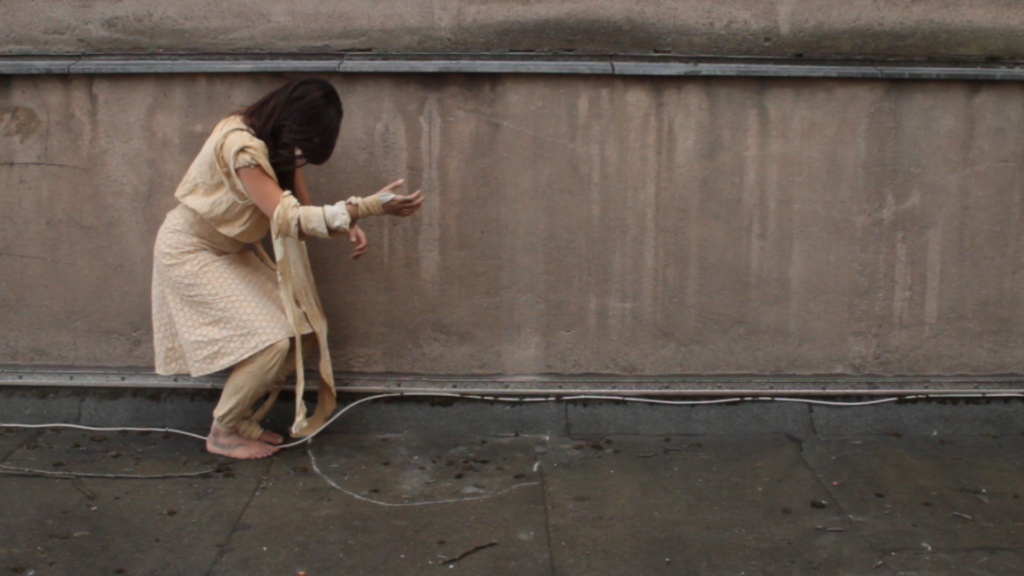 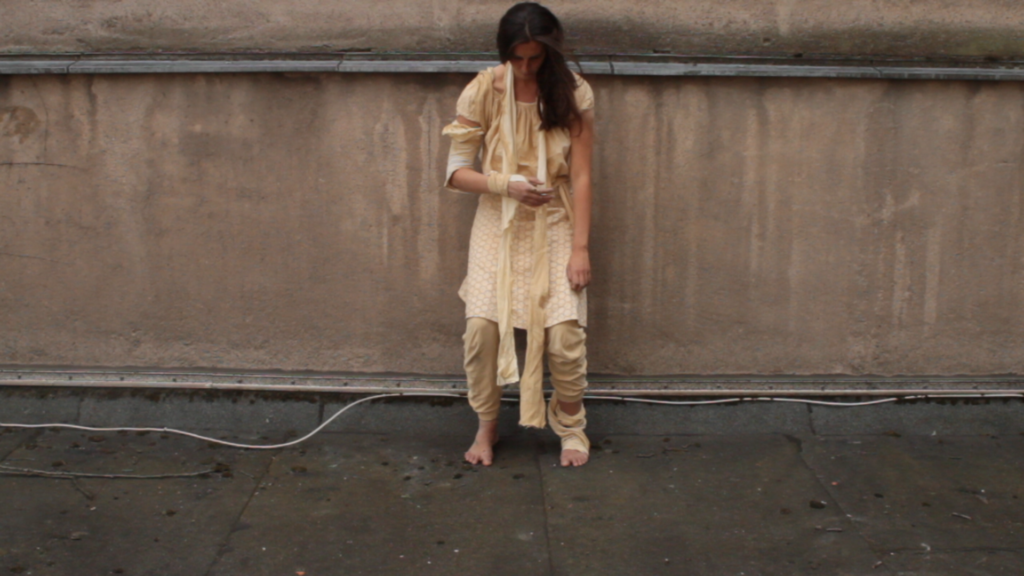 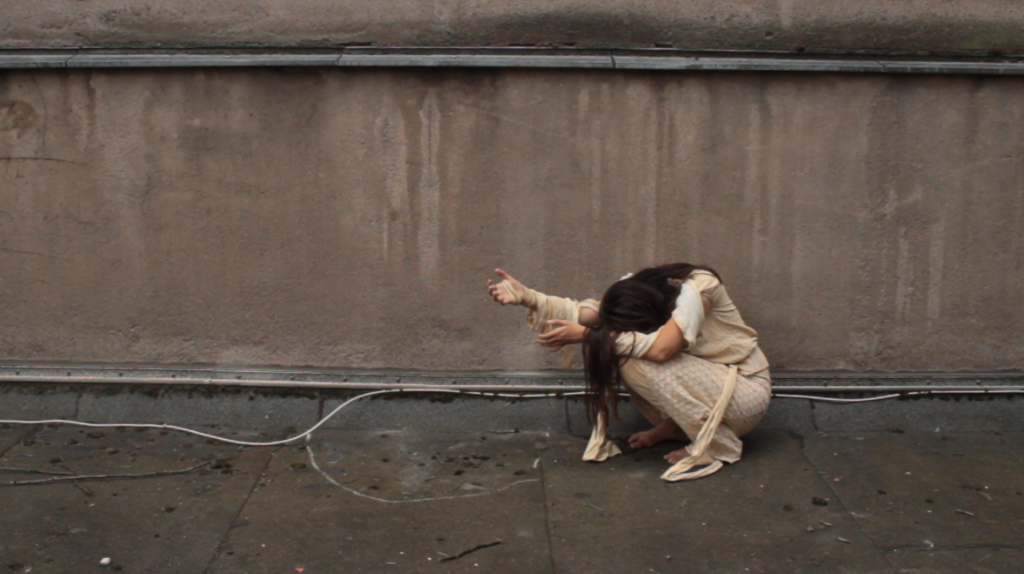 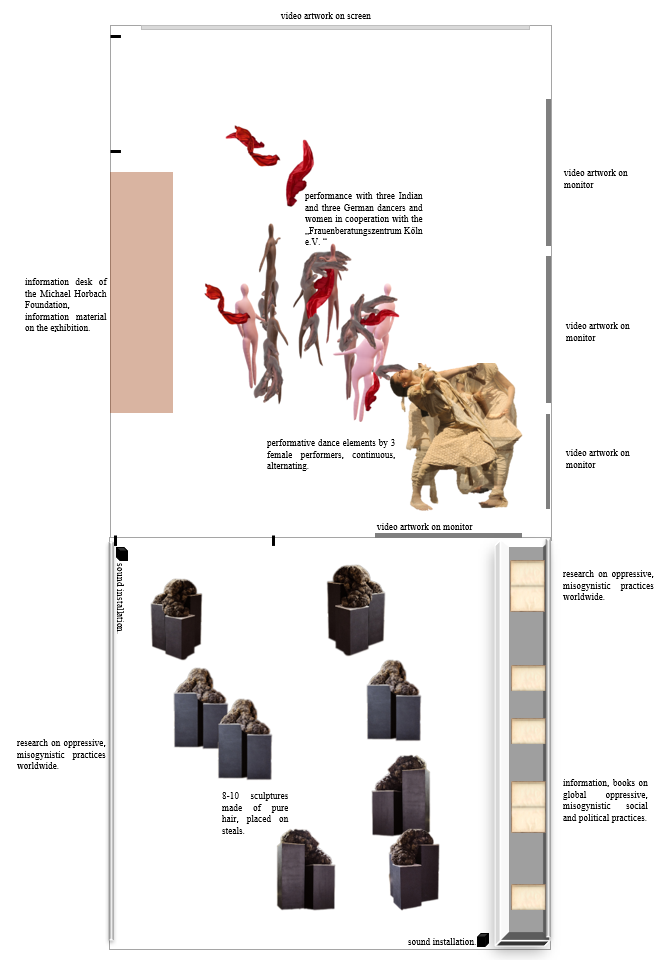